Here's how it started:

One day, there I was, sitting around thinking about King Kong. Which is actually something that happens to me on a (surprisingly) regular basis.

Well. I think it happens to me more than it does to a lot of people, but I don't really know, not actually being those other people and only having me to compare myself with. But in theory, I think it does. Happen more, I mean.

To my point, this very last night, I dreamed I was at a work meeting, with a bunch of us sitting around a conference table trying to decide something or other, and all of a sudden the room blipped out--with that bit from King Kong '33 just after he's killed the Tyrannosaurus rex and is playing around with its jaw--blipping in to replace it.

What I mean is the dream conference room and everybody in it just disappeared for a second or two, I was hanging out in a dream jungle watching Kong do his thing (Hi, Ann!), and then lickety split I was back in the thick of conference room politics.

I have no idea what Kong killing a dinosaur has to do with my workplace. The headshrinkers would probably have a field day figuring it out. The point here is that when I tell you Kong randomly pops into my head (asleep or awake) on a fairly regular basis, this is a true-to-life fact. 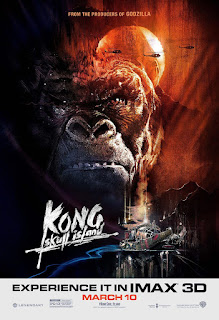 So what was I saying? Oh yeah. I was sitting around thinking about Kong.

At the time, the new Kong: Skull Island movie was just out, and thinking about it had me wondering what Kong-related stuff I might or might not want to talk about here at the Brain.

I wasn't thinking of reviewing that particular movie, since I try to stay away from things already getting a ton of web-tention, and Skull Island certainly qualified on that score.

Of course I've seen the movie, and enjoyed it--even if I'm not sure I "liked" it--but truth be told any ambivalence I felt was more about the whole "let's make Kong a franchise" thing than it was any problem I had with the movie itself.

But this post isn't even about that movie, so... moving right along.

Let's see.... Oh yeah, wondering about Kong posts. So I knew I wasn't going to do anything with Skull Island. And of course the original film has been written-on-to-death as well, so not much to work with there. A few ideas did raise their heads over the course of my mental wanderings.

Maybe, I thought...
And maybe I'll flesh out and post those ideas at some point, or maybe not: the deadmansmuse has often been known to veto what I consider exceedingly fine post-ideas. And it's pretty tough to crank out a post if the muse is against it. Like swimming uphill or... something.


(You saw the post title up top, and now you know exactly what I'm talking about.)

You see, right in the middle of all this Kong-Wondering (Kwongering?), my birthday happened. And the woman I love and share my life with walked into the room, plunked a largish-sized postal package in front of me, and said "Have a go at this, Love. Sorry it's not wrapped."

Of course I did have a go, and the following is what (rapidly) emerged from said package:

Then I was silent. For too long, apparently. When I finally glanced up my wife had this vaguely anxious look about her, and I realized she was probably attributing my silence to something other than Nostalgic Awe.

And indeed I did (have it and love it).

Even as a ten year old, I was OCD-ish enough to be able to keep all the little plastic bits (that most Colorforms Kids lose in their first two weeks of ownership) around and available for my playing pleasure. Alas, participating friends and neighbors were less careful, so pieces ended up being lost over time, and at some point I suppose the whole set likely disintegrated from joyful overuse. I don't remember the day it officially went away, but I remember the seemingly countless hours re-creating film scenes from 1976's King Kong, and coming up with plenty of my own alternate histories to boot.


From Wikipedia: Colorforms is a creative toy named for the simple shapes and forms cut from colored vinyl sheeting that cling to a smooth backing surface without adhesives. These pieces are used to create picture graphics and designs, which can then be changed countless times by re-positioning the removable color forms.... Sets initially featured basic geometric shapes and bright primary colors on black or white backgrounds. Eventually, however, the Colorforms line evolved to include full-color illustrated play sets, games and puzzles, interactive books and creative activity sets for children of all ages. The licensing of media properties related to contemporary pop culture became integral to the product and company's success.

Mel Birnkrant, Colorforms' Creative Director for more than 20 years, has a website that includes personal reminiscences of the various projects he was part of, including this "Super Colossal, Kong Sized Colorforms Set" we're looking at here, from 1977's catalog.


Oh. Incidentally, I found an additional Kong-related Colorforms product there, tucked away in the 1976 catalog. 3D Kong... Cool.


At any rate, Birnkrant's whole site's well worth a look.


So needless to say my wife knocked it out of the park with her birthday giftness this time around. (She always does quite well, way better than she gives herself credit for, but this one--truly exceptional.)

Alright. Let's take a closer look at this baby. You pop off that lid and here's what you see.

We've also got a nice setup for the film's big (?) Kong/snake fight going on here. (You know, this film has been, unjustly, in my opinion, derided over the years, but one criticism I have to admit bears up is the movie's lack of other giant/prehistoric beasts being seen on the island. Just can't argue that one....)

Let's see, what else? We got plenty of tiny people for Kong to stomp on interact with--four Dwans, two Jacks (running and vine-hanging), a Shifty Fred, various island natives (including Ape Mask Guy), sundry ship's crew and some National Guard soldiers.

Round it all out with three helicopters--two flying and one crumpled, a couple of fire/explosion-y shapes, some backpacks--always good for island exploration--and even a set of Pteranodons. (Those last guys weren't even in the movie as I recall--not even seen flying in the background. If memory serves, we really did get nothing at all but that aforementioned giant boa constrictor. Hmm. Wonder how long that boa was...?)

Oh, and let's unfold that instruction booklet for a closer look. (Per usual you can click any image to see it--dare I say--Kong-sized.)
Buh. Enough instructions, let's get a look at that play set surface. Or should I say... surfaces?

We start out with a decent rendition of... well I guess it's a conglomeration of that beach everyone first arrives at and the wall/gate as seen from inside the native village. We'll call it...


And this is cool. We can put little guys pouring oil on the big slidey bolt, natives running up and down the ramps and ladders. We could even do our best to recreate Kong busting through that gate--now that would be cool.

PDN (Pretty Darn Neat) so far, yet we are not even close to being done exploring this play set, no not close at all. Open up those gates on the initial surface and we get...

Now this is an amazing (especially to a ten year old kid) spread. So much to do, here! We got the skull cave and cliff for Jack and Dwan to dive from; we got the altar where we can recreate Kong's first big reveal; we got the log--picking up, shaking and screaming/falling surely to ensue--well, it would if the actual log was a color form instead of just painted on, but still.

Don't know what that little inflatable boat is doing there on the left, but it adds play value so I'm cool with it. Oh, and a nice detail: We got the twin rock towers and full moon there in the background. Pretty sure there was no actual mountain-shaped-like-a-skull in this movie, though. They totally lifted that from 1933's film, didn't they....

Okay, two play surfaces in and we're not done yet: fold that interior closed so we see the gates again, then flip the whole thing over on its back and... oh my god it's...

Violent and tragic death-place of Kong himself! But we will give those copters the fight of their lives before we go down for the count! (Won't we! Those bastards!)

And mind you, I had other Colorforms play sets back in the day--they were little single scene deals half this Kong set's size. This thing was truly a kid marvel. (And, clearly, I'm still partial to it.)

And... that's it: Best Birthday Present Ever. The End. Almost. No. Too abrupt.

Let's see, what can we do to finish up the post and give this set a proper send off...?

I know! We'll recreate John Berkey's (amazing) promotional art with our King Kolorforms set! (This is a great idea!) For those not in the know, John Berkey is this guy: 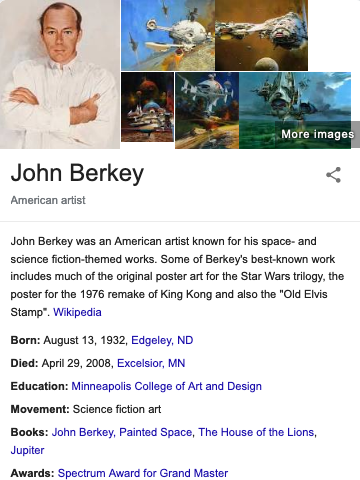 Okay. Here goes. Obviously, the Berkey art is first, followed by the... wait. No, I guess the Colorforms is actually the...

No that's not true. I can tell. But can YOU?


Actually, not quite. There were a few additional Berkey Kong pieces I found that, sadly, didn't lend themselves to Colorforms Cloning. So here those are, for completeness-sake.


Alright. Now we really ARE done.

Oh, and just so you know, deadmansbrain is the VERY DEFINITION of:

(In a discussion or review of a film, book, television drama, etc.) a warning that an important detail of the plot development is about to be revealed: e.g., "Spoiler Alert: You know John dies at the end, right?"

Yep, you can get an email whenever the Brain coughs up new stuff. Hairball!

(I know brains don't have hair, but I also know sometimes they lick things that do have hair....)

If it can be rated, here's what it gets and what that means. Kind of.

Heaven, I'm in heaven
And my heart beats so that I can hardly speak

I'm alright
Nobody worry 'bout me

My life goes along as it should
It's all very nice, but not very good

Be Likeminded to the Brain